Last Dimension is a 3D shooter in the same style of Taito's Zeitgeist, but with even better graphics. If it wasn't that you can move your ship around the screen while shooting at the hordes of enemies coming, it could be considered a "rail" shooter. The game lets the player choose between two ships: the first is fast and can shoot a lot of homing missiles at the enemies locked by the targeting cursor, while the second, though slower, is more resistant and, by keeping the fire button pressed, can charge a powerful shot which instantly hits all the enemies locked during the charging. No ship is better than the other one: it's only a matter of your playing style. Beside regular shots and homing missiles, the ships can also use a shield which, similarly to the one in Reflection, can send the enemy shots back to the sender. Its wise use can make things a lot easier.

Technically, Last Dimension is a beauty. The 3D graphics show good models, beautiful textures and great effects. The futuristic city of the first level didn't disappoint me. Before the boss, there's a nice tunnel, and the boss itself is very good. When I reached the second level for the first time, a "WOW!" escaped my lips. The strange creatures, cyberspace-style tunnels and superb light effects of the level, culminating in a giant dragon with transparent wings as a boss, make the author worth of an applause ;)

And, after the second level... Nothing. Sadly, that's all Last Dimension has to offer. I must add that it can be confusing at times too, due to the particular visual adopted - sometimes, you could not see the shots coming from directly in front of you. Worth more than a look and a play, undoubtedly; but it won't certainly hold your interest for long. 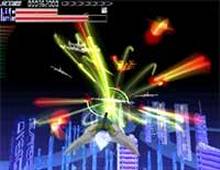