No, this is not PC version of a famous Amiga game based on Children's TV series (that one was never made for PC, by the way). This Knightmare is the recompiled DOS version of the Konami game of the same name that was first released in 1986 on the MSX platform and followed by 2 other games in the series. The plot is based loosely on Greek mythology. You are valiant knight Popolon, on his way to rescue Aphrodite, the queen of the castle who was captured by the evil Hudnos. All in a day's work, as usual.

Knightmare is basically a top-down shooter game that is disappointingly much easier than the MSX original. Basically enemies (balls, knights, etc.) come from the top of the screen, and you shoot them with knives or whatever power-ups you collect throughout the game. For its time, there is a surprisingly large number of power-ups to collect-ranging from weapon upgrades (swords, double knives, etc.) to items such as invisibility and shield. Too bad the game is too easy for most people, due to the enemies being too few and far between. Worth a look if you like the MSX series, but otherwise it's nothing special.

With lots of action in lots of levels, with lots of enemies and lots of weapons, this game is one of my favorite classics. 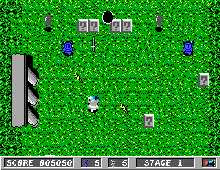