Johnny Bazookatone is a smart-looking platformer that unfortunately plays much worse than it looks. Despite having a somewhat novel protagonist (purple-hair guitar-toting dude), it isn't much different from hundreds of other platform games that have been around for eons.

Basically, you control Johnny, a cartoony guy who sports purple hair, flash clothes and carries a guitar that switches into a lethal machine gun called 'Anita'. Now Anita is of vital importance to our Johnny, as it can be whirled around to release musical notes that are deadly to his enemies while firing downwards when jumping, will slow down his descent to allow him to reach previously inaccessible areas of the game. It can also be used to propel him through dangerous waters. Your nemesis: the jealous Mr. L. Diablo and his minions, who kidnapped members of your band. Naturally, you must battle through five worlds to rescue your musical companions.

The game is virtually a living cartoon complete with SGI-rendered characters scenes and special effects. Shooting enemies, defeating bosses and collecting items are once again the order of the day. Each level has an individual theme, which are wide and varied, but deep down, the gameplay is the same old shoot-everything-in-sight chore that everyone is familiar with. It is unfortunate that the attraction of Jonny Bazookatone doesn't go beyond the superficial level of graphics, because a lot of nifty things could be done with the excellent cartoons to create a different experience. As it stands, you are better off playing Sleepwalker or WizKid if you are looking for something a little different than typical platform fare. Disappointing. 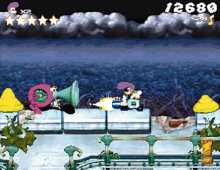