Probably Crystal Dynamics' least successful release, Gex is a decent platformer that tries too hard to emulate Earthworm Jim in playability and humor... but doesn't quite get there. In Gex, you play a cocky 20th century gecko with an attitude who has been sucked into his television by Rez, an evil creature whose idea of torture is subjecting innocent reptiles to reruns of sordid TV shows. Your job: fight your way through five zany worlds with themes based on various old B-movies.

The game does share similar charms to Earthworm Jim, Crystal Dynamics' most popular game. Gex moves (or rather, slithers) very smoothly, and the enemies are all imaginative - you will be attacked by all kinds of movie stand-ins, ranging from sumo wrestlers to zombies, all of whom are easily taken out with a whip of your fearless lizard's tail. You also have many unique attack and defense styles at your disposal, the best of which is the ability to leap up and attach yourself to the walls with suction-cup feet, therefore adding a little element of strategy to the game. Gex can also slurp up bugs with his long tongue, easily grabbing otherwise hard-to-reach power-ups. Lastly, a tail-stomp lets you squash bad guys and sail high into the air - a great move that is a bit hard to pull off, but is a lot of fun to watch when you do.

Unfortunately, we are left with a typical platformer once the novelty of seeing a unique hero and enemies wears off. Although each of the five worlds has its own zany style based on B-movie genres, most of the levels look identical with little variation or surprises. One of the game's most annoying feature is the game save feature, which is handled through passwords you get whenever you find a hidden videotape. This inheritance from console systems is unnecessary, unexplained, and simply makes the game more aggravating than fun. Thankfully, I felt that Gex is not half as hard as Earthworm Jim, so everyone should be able to finish the game without much trouble. 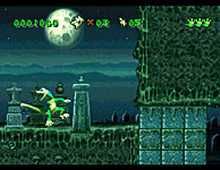