One of the best examples of what Elecbyte's powerful MUGEN fighting game engine can do, J-Dar-II is a fun vertical 2D shooter for DOS. The game offers three difficulty levels to suit your preference, and a unique power-up system: you gain extra weapons by collecting 3 capsules that float around in space. Different combinations of capsules yield different weapons, so it is up to you to remember each combination. The power-ups range from torpedos to more innovative weapons such as futuristic shurikens. 2D graphics are not very detailed, but more than adequate for the game, with huge explosions to boot. The soundtrack also deserves mention as some of the best you will hear in a freeware game.

The only real downside to J-Dar-II is that it has only four levels, although the last two will take you a while to beat. Although best remembered as a game that showcases the capabilities of MUGEN, J-Dar-II is a fun shooter in its own right that all action fans should take a look. 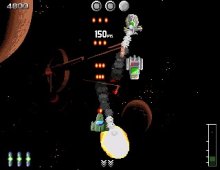