Hmm..yah, a pretty robot fighting game, you know, a game in which you take a character and blast everything off from the world, with no reason or anything to do so..but hey, programmers to have to work, no? i'd answer "no" seeying games like this one, but some of you could find this.."thing"..worthy a look or two.

Here's the story, you are an all-equipped-fully-trained-supersoldier, who can also operate this mecha-like robots; one of the few good ideas of this game is that you may choose beetween two totally different machines, who acts in a REALLY different way..one is a sort of a "rambo" equipped with various, and powerful, weapons, but as slow as a stone..the other has only a light-saber(yeah, something similar to a JEDI light-saber)and is as fast as light itself..another piece of irony like this and i'll be ready for a mental hospital.

Technically, the games defend itself quite well, good graphics, good music, good sound effects..plus, it has no problems working under windows, overall this is NOT that a bad game, but when a game lacks story..it lacks everything.

One of the most underrated and obscure 2D platform games ever made, Iron Blood offers fast and furious arcade-style fighting in well-animated backdrops, against a surprising variety of "bosses."

Gameplay essentially is identical to a typical side-scrolling platform game, except that the robots and enemies in the game are very well drawn in Japanese anime style. You have 2 players (Roy Fregun piloting the RG-104 Cyber-Troll and Sedrin Cleis piloting the SG-43 Ripple) to choose from in Iron Blood, each with his/her own special abilities and weapons. The game is equally fun with both, although the RG-104 Cyber-Troll's jet booster was very helpful in making those impossible high jumps you will need to make. Aside from the advantage the jet booster lends to the RG-104 Cyber-Troll, the game is equally challenging with both characters. The game's highlights, aside from great anime graphics, are definitely the end-level bosses, each of whom has unique weapons, attack modes, and weaknesses that are fun to discover. With plenty of enemy robots to blast, lots of cool power-ups, and imaginative bosses that are no cakewalk, Iron Blood is definitely worth a look to all fans of the genre. If you have even a passing interest in platform games, you will probably like Iron Blood. Fans of Mega Man (i.e. Rockman in Asia) in particular will find the game addictive. 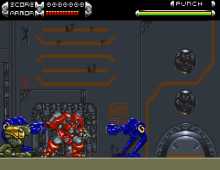