Heart of The Alien

Heart of the Alien is the highly underrated sequel to Out of This World, one of the best PC games ever made. Despite the success of Out of This World on PC system, developer Delphine Software for some reason released this sequel only for the SEGA CD console. Thanks to the GENS SEGA CD emulator for Windows 95/98 and above, PC gamers can now experience this excellent sequel to the classic action/adventure game.

At the end of Out of This World, we saw Conrad, the unfortunate scientist who were zapped into an alien world, being carried off into the sunset by his alien friend on the back of an alien pterodactyl. Heart of the Alien begins with the pterodactyl landing in the alien friend's nearly deserted village. The introduction is excellent: not only is the motion-picture-worthy cinematography of Out of This World intact, but the scenes also show you what Conrad's alien friend was doing while our hero (whom you played in the first game) was busy fighting alien guards and escaping the prison. There are also new flashbacks that show the battle that broke out in the alien's town which led to his capture. With Conrad still unconscious, Heart of the Alien casts you as his big alien friend as he embarks on another wonderful blend of action, adventure, and a bit of puzzle solving.

If you are somehow unfamiliar with Out of this World (and if you are, I suggest you stop reading this review right now and go play it ;)), the best way to describe it would be to say it is very much a classic platform game, but with the added element of having to stop at each area and think out your next move (the more recent Oddworld series of games would be a good approximation of gameplay). Similar to Out of This World, Heart of The Alien is undoubtedly one of the most difficult and unforgiving games you will ever play. Nearly everything in the game can -- and will-- kill you. Then, when you die, you have to start back to the beginning of the current play sequence (essentially a continue point) -- an annoying throwback to console games that you will just have to get used to. Worse, the interval between these continue points get longer and longer the more you play the game. The general rule of thumb is simply to never just try to run blindly through a room. Also, expect to die in every room at least once.. no kidding!

Although the game is definitely frustrating, the "one more try" appeal of the first game is intact in this excellent sequel. The game's masterful cinematography, lifelike animations of the characters and monsters, excellent gameplay that requires both reflexes and thought, and numerous interesting and dramatic plot twists will make you forgive the difficulty. The game also includes the first game as a bonus, although I advise you to play the native PC version instead of this emulated version. Overall, Heart of The Alien is definitely a must-play for fans of the original. Just keep in mind that it is VERY difficult, and the gameplay is not as sophisticated as later Delphine games (e.g. Flashback). 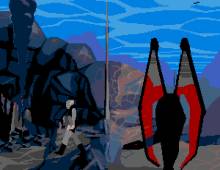 Heart of The Alien screenshot

People who downloaded this game have also downloaded:
Star Trek TNG: Klingon Honor Guard, Out of This World (a.k.a. Another World), Incoming, CyberMage: Darklight Awakening, Snatcher