One of the most sought-after console games in existence, Snatcher for the SEGA CD is an excellent cyberpunk action/adventure designed by Hideo Kojima, legendary designer who more or less built Konami's franchise single-handedly with classics like Metal Gear series. The game is a cosmetic remake of a 1988 game of the same name, released only in Japan for the PC-88 and MSX2 computers. Of all the versions of the game (including PC-Engine and Sony Playstation), the SEGA CD version is the only to be fully translated (including all voices) into English.

The storyline is undoubtedly the game's strongest appeal, even though it "borrows" a lot from cult cyberpunk films like Blade Runner, The Terminator, and possibly Invasion of the Body Snatchers. You play Gillian Seed, an amnesiac member of the "Junker task force," a special detective unit designed to hunt down and eliminate Snatchers - androids that infiltrate the society by assuming the identity of victims they kill. While your main task is to find out where the Snatchers come from and what they want, you will also learn more about your mysterious past, and how it relates to the Snatcher menace.

The gameplay is similar to modern-day adventure games from Japan: you essentially choose what to do from a menu of choices at the bottom of the screen. These screens are interspersed with action sequences, most of which are first-person gunfights. The game is extremely linear, but the outstanding story and atmosphere makes the linearity more of an asset than a liability. The game overall is not very hard - good observation, thorough investigation and interrogation of everyone, and some deductive skill are all you need to finish the game. I would say the difficulty level (as well as gameplay style) is about the same as Westwood's Blade Runner game. When you get stuck, it's usually because you haven't investigated everything in a scene or asked all questions.

The game is not only well-written, but also has an interesting cast of characters. This includes your sidekick robot Metal Gear, the suspicious bounty hunter Random Hajile, your estranged wife Jamie, the sly informant Napoleon, and your colleagues - other Junkers. Unlike most console games, the English translation and voice-acting in Snatcher are both top-notch, containing no trace of the awful "Engrish" that plagues other titles. Top-notch anime-style graphics, excellent atmosphere, and a sophisticated handling of "adult" themes make the game come across as a great game for adults rather than a cheap B-movie title.

Although it's not so much a challenging game as a fun "interactive movie" of sorts, Snatcher is a lot of fun. If you love Westwood's Blade Runner, you will definitely love this game, especially since it runs almost flawlessly on the GENS emulator for PC. Be warned, though: the game contains some explicit scenes of violence and sex that some may find offensive. 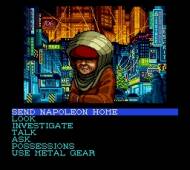