Largo Winch: Empire under Threat is a surprisingly fun 3D adventure games with action sequences from France. Based on a popular hero of the same name (who is virtually unknown outside France and The Netherlands), the game features an interesting plot that spans the globe, lots of McGuyver-style gadgets, and a good blend of action and adventure sequences. In contrast to most adventures, the game is entirely keyboard-controlled, but after you get the hang of it, this curious interface does not get in the way of enjoyment. The review at Quandaryland says it all:

"Largo Winch is a young billionaire (I remember when being a simple millionaire was enough!) who inherited a multinational corporation known as Group W from his father. It is Largo's business empire that is under threat. Largo has established himself not only by his business acumen but also by his support for humanitarian programs. At a reception promoting one such cause he receives disturbing news from his company's lab in Mexico where two security guards have been murdered and a scientist has gone missing. It is believed that the scientist was working on Genetically Modified Organisms against the directives of the Winch Empire. This potentially embarrassing news is swiftly followed by a bomb threat at the reception and sensitive documents are stolen during the confusion. Largo needs to find out who is attacking his company and flies off to Mexico to begin his investigations that will eventually have him traversing the globe in pursuit of shadowy infiltrators.

When I began the game my feelings were lukewarm. For a start it is keyboard controlled when I much prefer point and click, but more than this the female characters at the reception are stereotypically custom made (for those afflicted with teenage male hormones) with short skirts and plunging necklines. On top of that Largo's best friend, Simon, comes across as deliberately sleazy, though Largo is much more personable. As I played through this early part of the game the puzzles were easily solved and I was having some misgivings about it, especially as I was nervously anticipating the inevitable action scenes to come. However, I am pleased to report that my first impression couldn't have been more wrong as this is an enjoyable and substantial adventure game with only seven combat interludes. And the combat shouldn't deter too many adventurers as it is turn-based and only occurs in set-piece sequences. No reflexes whatsoever are necessary and you can take your time to plan your strategy to defeat the 'baddies', but more on this later.

As it turned out, the introductory scenario is almost like a tutorial easing you into the puzzles and interface. As the investigation gets underway and you explore new locations the puzzles gradually become more complex and intriguing, though never too difficult. Before I knew it my initial response was forgotten and I was carried along by this absorbing adventure game that has traditional puzzles, a suspense-filled story and fascinating locations.

The puzzles are mainly inventory based and you can usually find the items you need close at hand. This along with the suggestions, notes and information supplied by Largo, is what makes the early part of the game quite easy. But, as I mentioned above, the adventuring tasks do get more complex and interesting and the interactivity increases as you explore new locations and maybe even turn up a secret passage or two. There are plenty of environmental objects to inspect, some simply for fun whilst others provide important clues or might ultimately be useful to save your skin. There are also many items to collect and characters to talk to as you pursue your leads in the various locations. Your inventory never gets cluttered as you use most of what you pick up during each self-contained scenario. Other items are wiped from the inventory when you arrive at your next destination. There is a touch of McGyver about Largo in that he has to be inventive at times in his use of the items that he collects.

Other challenges include seven puzzles interspersed throughout the game that require you to hack into computer networks and avoid the security systems that try to kick you out. These too start out fairly gently and become progressively more difficult and I thought they were a fun challenge. You can even replay these and other puzzles (and the combat, should you so desire) as mini game 'bonuses' outside of the main game.

Even the combat scenarios can be seen as puzzles as only a strategy is required and none of them proved too difficult even when faced with up to four opponents. Action fans may well find the combat to be too simple as all you do is select your opponent, choose if you will use fist or foot or other item, then sit back and watch as Largo or Joy or Simon run up to the bad guy, carry out the manoeuvre then run back to await the assailant's attack. From an adventurer's perspective it's not at all arduous unless, of course, you don't like hurting people.

There is one relatively short timed sequence that I completed in just a few attempts and a couple of logic puzzles including a small sliding tile puzzle. Once you finish what needs to be done in any given location a cut scene will whisk you back to your New York offices or on to the next location revealed by the information you have uncovered. By the same token the game won't let you leave a place until you have completed whatever needs to be done at that time. Several locations you will visit more than once, as the dictates of the story require, before you catch up with your enemy. It is possible to die in this game, especially as you get closer to the climax, so saving often is advisable and there are plenty of save game slots available so you have no excuse.

Largo Winch: Empire Under Threat is a surprisingly entertaining adventure game that touches on some topical issues. Sure there are a few plot holes that can be put down to its comic book origins but overall I had a lot of fun with it. As it has a story driven, movie style plot with puzzles that start off gently before progressively increasing in complexity it is especially suitable for those new to adventuring. Hopefully, it will even convince some action fans to seek out more adventure games. Experienced adventurers too may find much to challenge and delight as once the game gets underway there are lots of locations to explore and plenty of things to do to keep the story moving along." 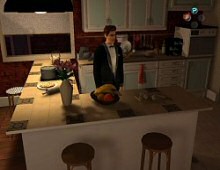