In Pursuit of Greed

In Pursuit of Greed is a decent first-person shooter (FPS) set in the distant future. Despite pixellated graphics and repetitive first few levels, the game gets considerably better and more interesting in later levels.

The premise: you are a futuristic mercenary, a "scavenger" hired by a group of elite criminals to wreck havoc on the lives of their enemies. Mission goals range from stealing items of value, to assassinating the gang's opponents or slaughtering "noncooperatives."

Compared to other FPS games released around the same time, the quality of graphics in In Pursuit of Greed is quite poor. The gameworld is not as detailed as Origin's CyberMage for example. In fact, the game cannot even match the visual detail of 1994's DOOM, and offers even less frame rate. Although you will hardly notice the slowdown on modern computers, you will still notice the awful pixellated monsters and lack of texture detail.

This is one of those shareware games where the full, registered version is much better than shareware one. The first few levels which make up the (freely distributable) shareware episodes are banal and boring. The number and types of weapons you can use are uncreative, the monsters more of the same, and level design forgettable. Once you proceed to the registered portions, though, it gets much better. Although graphics is still pixellated, at least you will encounter more challenging monsters, traps, and powerful weapons. You can also choose to play as one of five available characters, although the differences between them are minimal.

One nice feature of the game is "random item generator." Instead of placing ammunition, healing, and bonus items in fixed locations, the game uses these generators to randomly produce items. This makes every game different, because you will never know what item(s) you will find to help complete the current mission. All in all, if you have enough patience to slog through the first few levels, you will find an interesting and above-average game lurking behind the tedious beginning. It is by no means a classic, but it's worth a look. 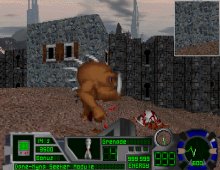 In Pursuit of Greed screenshot