Little Monk is a fun top-down action game from Jack Bean, a curiously-named, short-lived Taiwan developer who released only several games in their native country before going out of business. Which is a shame, because Little Monk is a fun and polished action game that stars a monk from Shao-Lin, a real temple in China long famous for "Shao-Lin" style of Kung Fu fighting. You will control the anime monk as he roams the land, battle various evil spirits and ghosts to return peace to the land. Anyone familiar with Chinese/Japanese folklore will have more fun with the game, since many of the "boss" characters in Little Monk are lifted straight out of popular folktales (the evil storm goddess is my favorite :)). Like other action games, you can pick up various power-ups around the landscape, as well as special weapons such as bombs and spells which have limited use. If you like Prince of Evil or great VGA action games in general, Little Monk won't disappoint. It's a shame so few quality Taiwan/Chinese games ever made it outside the continent. 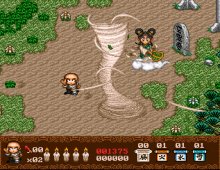