Defender of Grim (or D.O.G for short) is a fun and unique action game that is similar to Barrel Patrol but with much more variety and even a strategic element that is subtle, yet effective. As Defender of Grim, your mission is to protect an endangered alien species called Grim from endless hordes of evil aliens. Your arsenal includes bombs, lasers, shields, the ability to radiate the ground, and the almighty "purge" which purges the screen of all enemies.

Although it may look like a simple game, D.O.G. will grow on you after a while, as you face tougher enemy aliens that require different tactics to kill. Most of your weapons are limited and can only be replenished by collecting power-ups that randomly appear from time to time. This means that you must use the weapons economically and effectively, especially since different enemy types are vulnerable to different weapons. Unlike most action games, you cannot die. Your Grims, however, can die, and if you lose all of your Grims it's game over. The game gets more difficult as you progress, and the longer you survive, the more extras you can 'unlock' - these include mini-games, extra modes, and a neat image gallery.

The game is much better-looking than an average action game. The Grim and enemies look appropriately alien, and are smoothly animated. The interface is also very well designed, with a minimalist approach that maximizes the playing area and, hence, the immersion factor. Last but not least, the soundtrack from the likes of Dream Theatre and Pantera fit the mood of the game and lends it professional quality. With a combination of subtle strategy and nonstop action, D.O.G. is an addictive freeware gem that is well worth a look for every fan of action games. If you feel the pace is too slow at the begining, give it some time - it ramps up quite quickly after the first 5 levels or so. 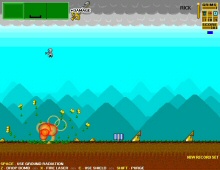