For those who don't like Alien, leave the room now. In Extremis, released in 1993 by Delphine Software and weighing in at almost seven megabytes, rips off the plot of Alien so badly that you wonder why the makers of the film didn't sue them.

You play a spaceship pilot whose craft crashes on an asteroid. Seeing a nearby space cruiser, you run into it, only to discover it filled with all sorts of nasties wanting to kill you. The game plays like a clone of Doom, although the graphics are admittedly more colourful and the science fiction element more obvious than it ever was in Doom. That doesn't really matter, though. The objective of the game - to kill as many things as possible - is simple and doesn't really require much by way of plot. As in Doom, you'll also have to search for keys and switches to open doors and progress to the next level.

The graphics are suitably colourful and graphic, but are no revolution - or evolution, even - from the graphics in games such as Doom and Ultima Underworld. The sound is good, although one can only take so much of screaming aliens and the sound of gunfire. Delphine released some thought-provoking action games, such as Another World, however this isn't one of them. Today, the best one could hope for from In Extremis is an hour or two of a trip down Nostalgia Lane - and nothing more.

In Extremis is probably the most obscure game Delphine ever developed, and for good reason. In contrast to the great blend of cinematic cutscenes and fun gameplay of Out of This World and Flashback, In Extremis is merely an uninspired DOOM clone with some improved graphics. The plot and sound effects are obviously -- and shamelessly -- copied from hit movie Alien: you play a space pilot who crashes into an asteroid and flee your ship into what seems to be an abandoned cruiser nearby. The cruiser turns out to be filled with mutilated human bodies and hostile aliens, which you of course must fight to get out alive.

Even with Delphine's name as a developer, I couldn't shake the feeling that Delphine just wanted to capitalize on the DOOM mania by releasing a similar FTS as quickly as possible, without attention to plot or even gameplay. This shows quite painfully in the game: you must find keys to unlock doors, blast endless waves of aliens, and get to the next level when the same thing happens all over again. If you like FTS or previous Delphine games, you'll be sorely disappointed with this average DOOM clone that brings nothing new to the table. No wonder the game disappeared from store shelves very quickly. 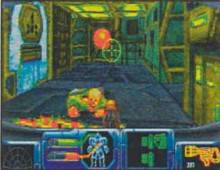 People who downloaded this game have also downloaded:
Lifeforce Tenka (a.k.a. Codename Tenka), Infestation (2000]), Metal Gear Solid, Pandemonium 2, House of the Dead 2, The