Hostage: Rescue Mission is a fun game from Infogrames, published by Mindscape in the U.S. As commander of an anti-terrorist squad somewhere in Europe, your job is to rescue U.S. Embassy officials who have been taken hostage by terrorists.

The game begins with a neat introduction screen, from which you then select which difficulty you would like to play at, and which mission you want to play. The choice of missions is misleading, however, because the gameplay remains more or less the same regardless of what you choose. The first part of your mission is to deploy your men in three marked positions around the embassy for a sniper position. Your operatives can run and duck, but that's all you'll need to avoid the searchlights.

Once your snipers are in position, the scene switches to the building itself. Here, you must strategically place the remaining soldiers (positioned on the rooftop) around the top of the besieged embassy, ready to abseil down to enter through the windows below. Should any terrorists appear at the windows, you can use your marksmen to silently kill them. But you must learn to distinguish between the silhouettes of the innocents and those of the terrorists. The last stage of the game takes place inside the embassy itself, where you must search the three storeys for people to rescue, shooting any terrorists in sight. The graphics are crisp and smoothly animated in EGA, and the keyboard-only controls are easy to learn and use.

Despite boasting a unique premise and gameplay for its time, Hostage becomes a repetitive once the novelty wears off. This is because all the three stages are action-oriented with little variation in enemy types, etc. Had the game offered more variety a la MicroProse's underrated Covert Action, Hostage would be much more replayable and engaging. As it stands, it is still a fun game that becomes boring after you see what the stages are like. 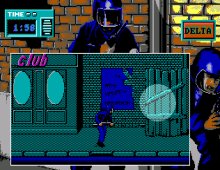 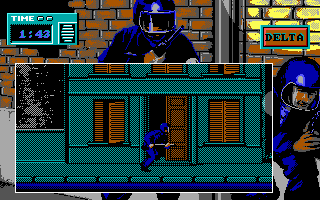 People who downloaded this game have also downloaded:
House of the Dead 2, The, Jungle Strike, Contra, Desert Strike: Return to The Gulf, Kingpin: Life of Crime