Desert Strike: Return to The Gulf

Pretty cool conversion of Electronic Arts' Mega Drive action hit Desert Strike, the first game in their "Strike"-games series. An isometric-view heli-shooter, not bad at all - just leave out the idiotic story. That banal premise has probably been played to death by the many follow-ups, without adding anything to the game.

Despite cliche premise (part of the war effort in the Gulf, yada yada yada), the game is a lot of fun. Your helicopter has various weapons and a winch, which can be used to pickup ammo, fuel, armor, and even POW's. Missions range from rescue to seek and destroy, and the game switches objectives often enough that it never becomes boring. The maps are huge, and full of interesting power-ups, secrets, and various ground-based enemies. You can blow up most things, including buildings, and the graphics are superior to most games at the time. Overall, a great game for all fans of shooters which might even appeal to flight sim gamers. The successor Jungle Strike is also available at this site.

Note: You might experience a "divide overflow" problem when trying to start the game. If you're one of these unlucky ones, just execute the game a couple of times in succession. It usually works for me after the 10th or so try ;) 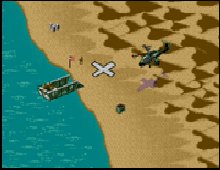