HaneHane Paradise is yet another insanely-difficult-but-fun freeware action game from Japan. Derek Yu (of Blackeye Software fame) says it all in his mini-review at TIGSource:

"My God, I have never known frustration like this. HaneHane Paradise is like a piece of delicious toffee that has a razorblade in it. On the outside, it's this cute little arcade platformer like Snow Bros. or Bubble Bobble. On the inside, it's pure evil that may quite possibly have been shat out of hell by Satan himself.

The basic idea is that you throw wings at your cute enemies to turn them into angels, and then you jump on their heads to destroy them. Yeah, I don't really get it, either. But anyway, what is so insanely frustrating about this game is trying to jump on the enemies after they've been turned to angels. For some reason, it's just impossible to catch them after they start flying around. And the worst part - if you don't catch them in time they turn back to normal!

Yeah, sure you can hit one or two easily when there's a whole mess of 'em, but try catching that last enemy. When there's only one enemy on the screen, you have even less time to whop 'im before he changes back. And the whole time, this insanely cute music is playing... oh man, I'm getting angry just thinking about it. 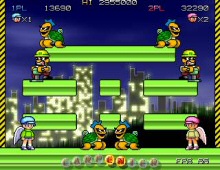