Hammer Boy is an average arcade game that plays like a cross between Kaboom! and Whack-a-mole. Armed with a big hammer, your job is to prevent the American Indians from reaching the tower behind your fort by hitting them on the head and putting out the fires that are thrown from the side. That's really it to the game -- new levels bring more Indians, more fires, but essentially the same gameplay. There is really no reason you would want to play this game for more than a few minutes, except perhaps if you are a fan of the comic book hero this game is based on. Overall, a downright average and even boring old game. Thumbs down for this one. 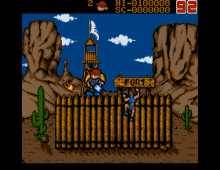