In early 1990s, Readysoft released a number of animated action games that became instant hits on the Laserdisc platform, although their PC counterparts suffered poor sales in comparison. This is by no means surprising: although these games boast very high production values and excellent animations which are created by Don Bluth Studios, their value as a game is sorely lacking. These game are little more than PC version of "choose-your-own-adventure" books, in which gameplay is boiled down to choosing an action from multiple choices. PC versions are, naturally, cut-down versions from Laserdisc originals, with many sequences missing altogether. It wasn't until the advent of CD-ROM that Readysoft (now sold to Digital Leisure) started making "deluxe" version of these games and put them on CD-ROM and later DVD. Treat the games as fun and humorous computer cartoons, but don't expect them to be involving games. If you like any of these disk-based versions, check out the deluxe DVD/CD-ROM versions at Digital Leisure's products page.

"Multi-scene action game by ReadySoft with great full-screen animations and graphics. Graphically a bit similar to the Dragon's Lair and Space Ace games, but gameplay overall is much more fun and could nearly be called a game. ;) Still nothing too exciting, but worth a try."

An unusual, Dragon's Lair looking game featuring an English soldier whose mission is to stop evil Von Max from creating a Doomsday machine. Rather original, eh?

In your quest for Von Max, you will go through eight levels of pure action. Each level asks you to perform something (shoot at everything that moves, fighting Von Max' followers, chase...) in order to advance. Before and after each level, the game shows animations that actually make the most of the game.

Levels are quite hard, especially if you don't have a joystick. Short and hard, not quite what you were looking for, is it? 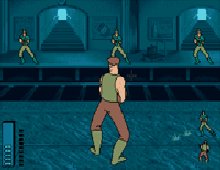