Endless Duel is the first and only game based on Bandai's popular giant-robot Gundam Wing anime/action figure series, part of the long-running Mobile Suit Gundam universe. The game is a 2D fighting game similar to Street Fighter, only with Gundam from the anime series. You can choose any of your favorite G-Wing boys to pilot Gundam Wing and Wing Zero, as well as other major mobile suits, including Tall-Geeze, Sandrock, and Mercuries.

Similar to most other fighting games on the console, you can play in the Story Mode, VS Mode, or Training Mode. In Story Mode, you choose one of nine Gundam suits and enter a tournament in which you must battle all the other mobile suits to win. The game is quite tough, since you'll have to start all over again if you loose a match. The match follows the usual "2 out of 3 rounds" rule, and your reward after beating all opponents is to fight Zechs Marquise and his formidable Epyon mobile suit. The VS Mode lets you fight a quick battle against either the computer or another human player, while the Training Mode is self-explanatory.

Endless Duel boasts excellent graphics, all the same Gundam attacks that fans will be familiar with, and intuitive controls. The game isn't as sophisticated as later 3D giant robot games (most notably Virtual On and its sequel), but it packs enough punch to entertain all fighting fans for some time - although experts will likely find the game far too easy and simple for any long-term session. Thanks to the translation group Aeon Genesis, you can now play this console classic with everything translated into English. 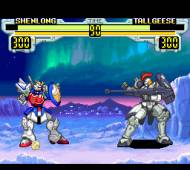