A fun freeware fighting game based on the popular Japanese cartoons Gundam, Gundam Wars 4 is a fast-paced little game similar to Little Fighters, in which you try to defeat your opponent. What makes this game different is that your character (or characters, if you are controlling both of them yourself) is chosen from a large variety of SD (i.e. super-deformed) Gundam robots. The fun is in seeing, and using, the robot's attacks. Each robot has its own strengths and weaknesses which are very faithful to the anime series (the Gundams all have their trusty laser swords, for example), although those who have never watched the anime (unfortunately) will still enjoy the variety of attacks that each robot has.

The game also adds an extra layer of planning to the game in the way of separate energy bars for each weapon (sword, gun, and bazooka). If you use one weapon exclusively for a while, its energy bar will be depleted. Since energy automatically recharges over time, you must balance your use of the three weapons to make sure that not all of them are depleted at once. With frantic action, neat weapons, and a great variety of robots, Gundam War 4 is a solid fan-made game that deserves to be played by all fans of the anime. 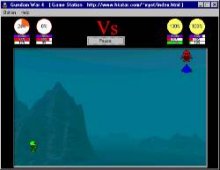