One of E-Game's earliest promotional freeware titles, GulaSidorna Super Finder is an okay action game sponsored by GulaSidorna, Sweden's premier Yellow Pages. Gameplay is simple, as the in-game instruction states: "Your mission is to visit some facilities in the city, marked with red stars on the big map and small, blinking red dots on the overview map. You control the yellow car and must visit the different places while at the same time trying to avoid the blue cars. They will try to stop you by crashing into you, but you have one advantage. You can stop them a short moment by letting out smoke behind you. The time is also a factor, so you better step on that pedal!

You move the car with the arrow keys and let out smoke with spacebar. A score penalty is applied at the end of each mission depending on amount of smoke used, so you should use this feature wisely."

Overall, a simple and fun game, although quite a bit more repetitive than E-Game's later offerings. 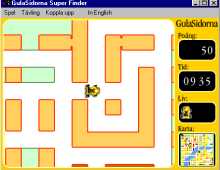