Somewhere, long ago, in one of those many alternate realities popular in RPGs and fantasy adventures, a war was fought amongst three dark warlords and the three races of the planet, the Elves, the Humans, and the Dwarves. In the end, at the cost of all but one of each race, good triumphed. Since then, the legend has become just that--a story--and life continues on as normal. You've heard that a million times before, I realize, but bear with me.

Fast-forward to today. An elf bounty hunter--one Popful Mail--is having a lousy day. She's been stabbed, bitten, blown up, and lost her bounty to boot. Her future as a bounty hunter is pretty bleak, when she stumbles on the biggest bounty of them all--an evil wizard has started being evil again to the denizens of the countryside, and Mail, being the heroine of this particular story, sets out to take care of business.

I'll leave the story at that, to avoid revealing anymore of what becomes a good story, given time and the ability to move beyond cliches. You'll add characters, get magical mystical neato things, and smite evil where ever it pokes out its evil head.

Popful Mail is, at the root, a platform sword-and-sorcery title, not unlike the classic Monster World (Wonderboy in the US) series. You, as Mail, jump on platforms, earn money, buy things, and run into people with interesting problems. Not the most original of concepts.

What will probably drag people in who like it is the anime-esque environment and plot. The story opens with a relatively long (though, by modern standards, poorly animated) sequence, and continues on, with more anime bits and pieces as things progress. Characters avoid stereotypes and often make fun of the standard cliches of adventures and RPGs (for instance, in this case, the Elf--often the wimpy little mage--is the brazen fighter type, with a tendency to be mean and greedy for no good reason, while the bosses sometimes sport very...bizarre machinery to keep you down). The imagery is vibrant, colourful, and while it makes use of tilesets and may become repetitive, it's just simply fun to play around in.

Do note, though, that the English version is rather difficult--some enemies can devastate you in two or three hits from long range, and though you carry an Elyxr which will bring you back to life when you die, you can only have one at a time. Some of the jumping is, as platform games can be, overly complicated, as Popful has a tendency to slide just a little further than you'd expect her to. Sometimes evading damage isn't easy, and the cheaper healing items don't make very much of a difference in your hit point total. Enemies, initially, drop off Herbs which give you a few HP back, but almost immediately those go away.

Give it a chance, if you enjoy anime or rather silly platformers (this game does not remotely take itself seriously), and I'm sure you'll find yourself at least entertained by Mail trying to get a little respect from the world around her. 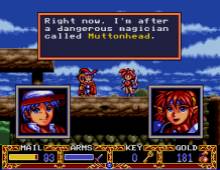