Pocahontas is a well looking arcade game where you play as the popular cartoon character Pocahontas (of course also well known from the books). You start the game by that you have to collect 20 feathers and then bring them to a man. Most of the tasks in the game are like this and nothing special at all.

The game is play as a side scroller where you have to jump around from different platforms. Unlike many other games you are quite close to the things which mean that both you and all the things you are near are quite big on the screen so this is a bit unusual for this kind of arcade. It also makes it a bit harder to play since you can't view that much of the area you are at (which again makes it harder to play).

The graphics are well done. It even seems the developers have spent a bit too much time on them so the actual gameplay has suffered because Pocahontas is just another game that had to be released to bring a game "bundled" with a movie like Disney are famous for doing. Nonetheless Pocahontas is much better than many other games in this genre and fewer games in this genre were being published in this period so it's positive that some game companies still were interested in this. An average arcade game with decent graphics but little gameplay.

Made before Disney's blockbuster animated movie of the same name and the subsequent game, GT Interactive's Pocahontas is an average true-to-the-story side-scrolling platformer that brings you back to the time when the Native Americans, with all their spiritual wisdom and kinship with nature, were attempting to live in harmony with the new English settlers. You will begin the game with Pocahontas as she seeks out her Shamanic guide to help her overcome obstacles and to keep peace between the white man and her people. In Level one, Pocahontas uses her agility to collect at least twenty feathers to exchange them with the Shaman woman for magic cards that help Pocahontas throughout her journey. Level Two finds Pocahontas trying to get through the forest while avoiding the spirit bear. In Level Three, you will switch to control John Smith, the American explorer, as he needs to shoot enough animals before night time while avoiding the bear. The next two levels alternate controls between Pocahontas and John Smith, culminating in the final level (seven) where you will control both Pocahontas and John Smith.

Although the levels are diverse and tie directly to the story's plot, the game overall suffers from awkward character movements and the too difficult gameplay that is best left to expert gamers only. Worth a look, but action game beginners should look elsewhere for their fix. 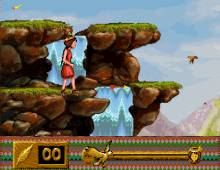