Cocoron for the NES console is one of the most original and quirky games you'll ever come across. The game was released only in Japan, but thanks to fan group Magic Destiny, we can now play the game with the excellent fanmade English translation patch.

Although it may look like a typical platformer at first glance, the game's highly innovative "mix 'n match" character system adds a strategic angle to the game that makes it much more replayable than an average action fare. The plot is negligible, but appropriately psychedelic: you are stuck in your dream world, and you must find and rescue kidnapped Princess Rua. The fact that's your own dream explains why you can create your own character from different parts.

The gameplay is similar to Mech games on PC - think of it like a simplified, cutesy version of Cyberstorm and similar games. You basically create a character from 3 parts: head, body, and weapons, then send your robot into battle. The parts are not just for show, either. Different combinations of head and body change your total HP (health points) amount and weight, which affects your character's agility. Certain body types give you special abilities, such as flying. Weapons add weight, and, obviously, change your battle effectiveness. There are also multiple designs available for the same part, so you have a lot of flexibility in designing your character.

The levels in Cocoron are very imaginative, to say the least. You'll find flying elephants and various other wacky dream-world characters, many of which don't resemble any real-life animals. Similarly, your weapons can range from objects like pencils and more wacky objects (reminds me of Superhero League of Hoboken somehow). In addition, the level system is quite unique. There are specific areas you must complete to beat the game, but the route and order you get there are entirely up to you. So you likely won't see the same stage twice after replaying the game several times. Combined with the versatile character design system, this makes Cocoron a much more replayable game than other NES platformers. If you like unique, replayable platformers and can stomach the cutesy graphics and wacky sense of humor, check out this charming old game. 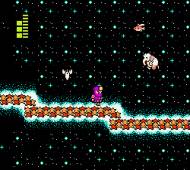