Mimi & the Mites is a fun shareware puzzle/action hybrid from the Unobstructed Reason Corporation (probably the best game company name ever). While it looks like a standard side-scroller at first glance, the game actually is a puzzle-intensive fare whose complexity grows the more you play.

Your objective in Mimi & the Mites seems simple: guide Mimi through 2D side-view screens to the level exit unharmed. Of course, it would be no game if there were no obstacles, and you'll find many kinds here. The most dangerous of these are the mites mentioned in the title. Luckily the game gives you a few ways to dispose of the slime-like pests. You can melt the mites with your zapper gun, although ammo conservation is crucial, since your ammo is limited and ammo refill stations are few and far between. You can also get rid of them is to jump on them from a ledge. Either way, the mites only stay in their harmless state for 30 seconds, so your best strategy is often to zap them and run away. You lose a life either when Mimi is touched by a mite, or your time runs out (in some levels with time limit).

The mites aren't the only nuisance in the game. You will often have to find and use pressure plates to disable force fields. To make things more difficult, some plates can only be activated by Mimi, while others can be activated by the mites as well. This means you must sometimes lure the mites to the pressure plates, and time it so that they will land on the plate at the same time that you stand on another one.

The beauty of Mimi & the Mites is that the more you play, the more new devices you will discover, and the more interesting the game becomes. Higher-level areas have transporters that whisk Mimi to a different floor (mites also have their own transporters as well, and will use them to sneak up on you). Conveyor belts, portals, and trap doors can either help you or kill you. You will also start to collect different kinds of ammo and weapons depending on the stage you are currently on. You will come across flamers, machine guns, laser cannons, and stasis beams (used to freeze mites for 45 seconds). Despite a lot of tough challenges, the game is quite forgiving: after you die several times in the same level, you will be given the option to skip the level entirely and proceed to the next one. This makes the game quite accessible to novices or puzzle gamers whose reflexes aren't too good.

Overall, I find Mimi & the Mites to be a fun, charming, and absorbing game. The increasing variety of gameplay makes it like a less polished version of Epyx' Impossible Mission games. Be warned, though: the game's graphics and sound/music are below-average - they look downright amateurish in some places. But if it's the gameplay that counts, Mimi & the Mites will keep both puzzle and action fans entertained. 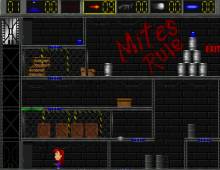