Grounstream is another fun RPG/adventure/platformer hybrid from Japan. While it is not as good-looking or as addictive as Akuji the Demon, it is still a very fun game that succeeds in keeping you glued to the screen with one cool surprise after another. Similar to Zelda, you gain hit points and new skills and you gain experience (from killing anime monsters, supposedly). These skills range from weapons to non-weapon skills that are essential to overcome physical puzzles. The game is all in Japanese, but reading is not crucial to finishing the game - trying to use every skill you have when you are stuck is usually enough to stumble on the right solution.

Most monsters you can kill will leave either gold coins, hit points, or power-ups. You use gold coins to buy more power-ups in shops that are spread across the levels, and you can save the game at "save points," similar to console games. The game is much longer than your average freeware platformer - I have seen 5 levels so far, and there is no sign of an ending. Although it starts out very slowly, with few monsters to fight and sparse landscape, Grounstream gets better and better as you discover new skills, meet friends who will help you fight, and explore more fantastical terrains. Anyone who enjoys Akuji will likely enjoy this game too - although don't expect the game to be as polished, and give it some time to impress you. 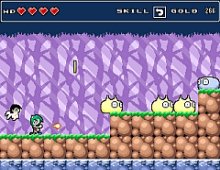