Gravity Force is a fun PC remake of an underrated Amiga game of the same name, first released by Kingsoft in 1989. The game's looks and feel are similar to Scorched Earth: Your mission is to collect all cargo and return it safely to your home base. To complicate things, you must fight enemy ships and defy gravity that is constantly pulling you to the ground. To defend yourself, you have a cannon as well as 6 other weapons. The challenge in the game, though, lies in maneuvering your ship deftly, constantly battling gravity to avoid a collision course with cliffs and other barriers. This PC remakes tries to go beyond the original game by offering a wider variety of missions. In addition to cargo missions, you are also assigned to guard other ships, as well as fly search-and-destroy missions. This version unfortunately doesn't support network mode-check the semi-sequel Gravity Strike for that. The existing single-player missions and two-player modes are still a blast to play, though. Not as addictive as Scorched Earth by any means, but well worth a look for fans of simple and fun space games. 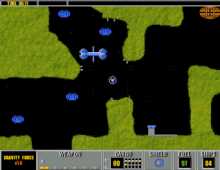