Giants of Steel is a fun 3D giant robot action game from DIGITAL Nightmares, a small Germany-based developer who released the game into the public domain after selling it for a number of months as shareware. Games Domain's says it all about this unpretentious game:

The game uses a 3D engine which allows looking in all directions and uses simple shading to render the objects (no texture mapping or lighting effects). The controls are fairly simple: the arrows move the turret, pressing shift controls the whole Mech (shift+up arrow accelerate, shift+left arrow turn left, etc.), pressing '=' realigns the turret to the forward position. Having the same keys for changing heading and speed and for moving the turret makes it very easy to control the Mech, but makes combat tactics such as circling the target while firing at it, somewhat difficult to accomplish. Firing is done with the right Alt and Crtl keys, one weapon may be assigned to each. One serious design flaw is that to assign weapons one must press the space key and either the 'alt' or 'ctrl' keys to cycle through the weapons which may be assigned to the key, unfortunately it is very difficult to accomplish this without also firing the weapon thus wasting precious ammo.

The game offers two modes of play, "1 Player" mode in which the player has to complete missions and is pitted against the computer, and a one on one "2 Player" mode. In this (the second) mode the screen is divided in half and the speed of the game drops dramatically. I didn't try playing in this mode against an opponent so all I can say is that it doesn't look too comfortable.

The difficulty is not too high but it is easy to get in a cross fire between a mech, an helicopter and a patrol boat, overheat and get blown to pieces if not careful. It is also quite fun if you're not a graphics freak and can cope with the relatively dull scenery. There is a variety of enemies to combat, tanks, helicopters, boats and Mechs among others, the enemy Mechs being the only real threat. Judging by the great variety of Mechs and weapons available for the two player mode the missions on the full version should offer a nice challenge." If you're in the mood for a fun, unassuming 3D giant robot game that doesn't pretend to be Earthsiege or Mech Warrior, Giants of Steel fits the bill. 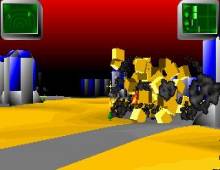