Ghosts 'n Goblins Exceed is yet another excellent freeware game inspired by 8-bit classics. Yes, this time CNC Darkside put fusions aside and made a remake of CAPCOM's classic. Be warned: the graphics are very dull, and the sprites are too small. Nice sound and playability, though. The original levels seem to have been reproduced decently, although they are not exactly the same as the ones in CAPCOM's original game. Remember that you can double jump here, like in Super Ghouls 'n Ghosts on the SNES.

Aside from the original's reproduction, there's the Exceed Mode: all new levels, structured as a simple action-adventure, you have to find some keys and solve some small physical puzzles, so to reach the bosses (which are NOT from Ghosts 'n Goblins). I had fun with this mode too. The fourth level is difficult because there's no map. A tip: in two points you can exit from the same side of the screen, but at two heights - well, they doesn't necessarily lead you to the same place...

There's also some taste of parody: see the abduction by the demon before the title. And, when you are hit a second time, after losing the armor... You die? No, you become a skeleton in boxers!

Definitely not CNC Darkside's best game, but a nice work in any case. 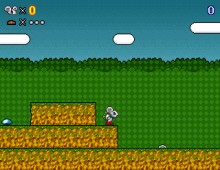