Not to be confused with (in my opinion superior) Access Software's game of the same name, Echelon from Russian developer Buka is an ambitious space combat simulation that is better than average and is fun enough to attract newbies to the genre (although surely only newbies with deft fingers, since the game is very tough), but lacks the "staying power" that would vault it to join the ranks of Freespace. The more or less cliche plot: save the Federation while figuring out why a vicious alien race is bent on destroying humans. Jose Ayala's thorough review at TechExtreme does a good job of explaining what Buka did right and wrong:

"While Echelon is set in the future and is labeled as a space combat simulation, it's really not fair to catalog it as such. The simple reason is that while you will be piloting exotic ships, the game itself is set inside the atmospheres of several planets. This finally introduces the concept of ground strike operations into the space sim genre. Briefly touched upon by Wing Commander 3 but sadly ignored by subsequent titles in the series (or any other space simulation for that matter), it's good to finally encounter a space sim that allows players to conduct both space superiority and ground strike roles.

The single-player campaign consists of roughly 30 to 40 missions, and you will be presented with several branching missions along the way that dictate which direction you take next. Given the fact that the entire game takes place inside the atmosphere of an alien planet, most of your missions will task you with both ground strikes and air combat at the same time. For example, on most missions you will be tasked with covering a package of assault ships, and once they have safely reached their target and you have cleared enemy ships, you will also be tasked on the fly to assist in destroying the main ground objectives. Still, it is this same mission structure that brings down Echelon's gameplay down a notch. For starters, even the most basic of missions can be extremely tough to complete successfully. The mission multi-tasking element introduced by the game's ground attack elements acts as a double-edged sword; while ground operations are a welcome addition to space sims, this same element also makes 90 percent of the missions a living hell to complete.

Since the game takes place inside a planet's atmosphere, the player will have to get accustomed to a new style of flying in order to survive. Physics elements such as inertia, friction, and gravity are modeled, and as such, you won't be able to turn or stop on a dime or make sharp turns without losing speed. This also means that players will have to constantly mind the ground in order to avoid collisions, as these are deadly, just like in real life. As such, players will get the chance to fly some 20 different types of fighters and assault craft during the course of the game. The first few ships will consist of flimsy scout and light attack fighters, and as you progress through the campaign, you will be cleared to use more advanced aircraft. All of the ships, except for the interceptors, feature exhaust ports in several areas of the ship. For example, most fighters feature thrusters on the back, front, underside, and on the sides of the wings. This gives the player the chance to pull off some cool maneuvers during the game.

This also allows players to hover in place. Ground effects are also modeled for all ships. Like any helicopter pilot knows, ground effects occurs when you fly really close to the ground; the thrust from your propellers/engines rebounds from the floor and hits your aircraft, creating a cushion that keeps your aircraft in the air. In the game, this effect is used to give your fighter an extra boost of speed while flying below 50 feet.

Echelon promised to bring several new features into the stagnant space combat genre, and while it managed to pull several of them off, the end result is not what most people expected. The ground operations element is a nice addition to the genre, but it also adds a steep challenge curve that even in the easiest difficulty setting can give any player fits. Its repetitive nature and unforgiving AI can quickly frustrate both hardened veterans and new players alike, while its restrictive nature when it comes to ship and weapons selection further adds to the difficulty of the game. Finally, while it looks great, it demands a fast computer system in order to take advantage of all of its graphical goodness. While the game includes a multiplayer component, it remains buggy and extremely laggy, even on excellent broadband connections. As it stands right now, Echelon is just an average space simulation. Spending a bit more time to refine the gameplay elements and to hash out better missions would have given it a better chance." 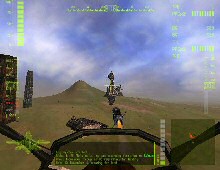