Dif-1 Laser Tank is a fun tank game that looks and plays like an adaptation of arcade game TARG. The goal is simple: wipe out enemy tanks in each level and try to get the best score. There are blocks that help you hide from enemy fires, as well as giving power-ups when you blast them open. Power-ups range from freezing all enemy tanks, to calling your mothership to drop a big bomb that destroys all enemy tanks. Dif-1 doesn't introduce any novelty to the crowded genre, but it is still a solid and thoroughly entertaining little game that's worth a look. Beware of the later levels, though-- the game gets difficult VERY quickly (after level 3 or so), so arcade beginners may want to look elsewhere. 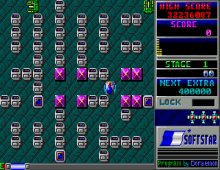