Die Slave is yet another excellent freeware shooter from Japan's rapidly growing freeware development scene. Similar to Vsys Gaiden and Amanagi, this horizontal shooter features full 3D graphics for everything from ships to asteroids and other objects in space. The game takes advantage of your 3D card, so anyone with 3D accelerator will be able to enjoy more spectacular graphics. The game already looks very good in software mode for me, with lots of cool weapon effects, power-ups, and appropriately scary bosses ;) Unlike Amanagi, Die Slave is quite difficult - if you're not a joystick expert, be prepared to spend a lot of time with this game just to get pass the first 3 levels. I can't really think of anything bad to say about this quality old game, except that sometimes it's hard to tell where the enemies are in the midst of dozens of laser rays from my ship's guns. If you enjoy shooters in general, Die Slave will keep you occupied until the next Raiden comes along. Highly recommended! 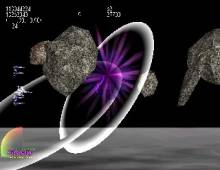