Defcon 5 is a good first-person action game from Millennium that deserves much more attention than it received, although original Playstation version (published by Data East) did marginally better than this rare PC port. The game takes place in a not-too-distant, cyberpunk future when multi-planetary corporations control the world. You are a "cyberneer" (cyber-engineer) working for Tyron Corporation, put in charge of setting up the automated defense system for a key mining planet of the company. As you are doing your job, the base suddenly comes under attack by unknown invaders, who manages to sabotage the defense software as well. Your task is to utilize the capabilities of the base to attack invaders, find and collect evidence of the mastermind behind this sinister plot, and escape alive.

Although it looks like a typical DOOM clone, Defcon 5 is much more than that. Similar to System Shock, you have to accomplish mission-specific tasks, mostly involving finding various keys and other objects. Similar to Half-Life also much less dramatically, events happen at a pre-determined time in the game to advance the story. The game is largely non-linear, though, in a sense that you can collect the necessary objects in any order you want. There are also dozens of possible paths to finish the game, making it quite replayable after you finish it once. The complex is huge, and the enemy AI is quite decent - they will gang up on you, run away when they are near death, and call for reinforcements.

The feature I like most about Defcon 5 is that you can find and use many futuristic gadgets, many of which allow you to leverage the defense software to your advantage. You can control combat droids and send them to do your bidding, for example. Another realistic element of the game that adds to its complexity is the oxygen level. You must keep a close eye on the oxygen meter when you enter new areas - non-breathable air causes damage to your health. Certain robots, such as the combat droids, pollute the area after they are destroyed. You can make non-breathable air in an area more breathable by opening doors to other areas (such as elevators) to dilute the contamination level with clean air. Or you can send out your combat droids to do this for you. Level designs are not nearly as interesting or varied as System Shock, but there is still a good mix of outdoors and indoors scenes.

Overall, I enjoyed Defcon 5, although it's not as absorbing as System Shock and other classic FPS hybrids. Although the action is fast and frantic, it is sometimes tedious to wander aimlessly through the base to look for a crucial object. Recommended if you like action, adventure, and strategy hybrids, but by no means a Top Dog. 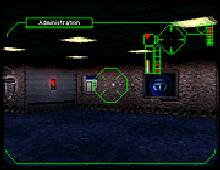