Death Squadron is a rare commercial ripoff of Mark Currie's 1990 freeware Chopper Commando 2, a fun oldie Sopwith-style 2D aerial bombing game for DOS. Gatecom pretty much took Currie's game, changed the name, and marketed it as a commercial title. The gameplay takes the basic concept of Sopwith, and adds a lot of gameplay options that increase long-term value and make it more challenging. Your goal in the game is simply to finish missions and return to base alive. The missions are usually "drop bomb at target x" or "kill x enemy helicopters" varieties, but there are also other types thrown in the mix. What I find quite neat is that you can bail out of your helicopter. This means the mission can be considered a success (although with lower score) even if your helicopter is shot down in flames - provided of course that you bail out in time and are rescued by a friendly helicopter. As you accomplish missions, your pilot will advance in ranks and numerical score. You can use the practice mission to get the hang of the controls, but they are quite easy to learn.

In addition to different mission objectives, you must pay attention to some realistic elements, such as limited ammo and the condition of your chopper - the helicopter can sustain some damage before it explodes. The graphics are disappointingly primitive for a 1992 game, but perhaps that's the way Gatecom wanted it - to evoke the nostalgia of 4-color Sopwith. If you enjoy Sopwith, you'll probably like Death Squadron too, although it doesn't have quite the same charm or fun surprises (no flying cows here) as the original. If anyone has more info on how Chopper Commando 2 came to be this blatant ripoff with a name change, please let me know! 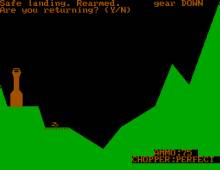