PLOCK - *click* *clickaclick* The typical sounds of a pinball machine. Add some happy nonsense music to it and you got it. This game recreates a great "realistic" pinball atmosphere. You play on a billard themed table that simply looks great (thinking of the time it was made). The sound is also nice, some digitized speech in the beginning. Gameplay itself is not quite as good as the graphics if you ask me - it's still good, but not good enough to beat the really big pinball games. Still enough to have a lot of fun with this.

The controls are accurate - you can even push the table from different sides (don't overdo it or you'll TILT it). Basically good work here from the technical side and a sure must for every pinball fan.

Second in Amtex' line of computer pinball games (after Tristan Pinball) and the first to simulate an actual pinball machine, Eight Ball Deluxe is an excellent replication of a popular Bally Midway pinball machine of the same name. The game features hi-resolution graphics, supporting modes from 320 x 200 all the way to 1024 x 768. One of the game's strengths is the ability to change the voltage levels, which allow you to either supercharge or deaden the bumpers, and the ability to change the pitch of the playing field, making the action faster or slower. Another unique feature is the magnet ball, which allows the player to, using his mouse, drag the ball around the playing field, to experiment with the different scoring methods and to develop strategies.

Unfortunately, the game has one large drawback: lack of variety. Other computer pinball hits such as Pinball Fantasies and Epic Pinball include several different pinball games, while Eight Ball Deluxe includes only one. To it's credit, however, there is nothing wrong with the game itself. It's perfect for those times when you've got five minutes to play something.

The ball and flipper physics are of proper simulation quality. The sound effects realistically capture the sound and speech synthesis of the time and convey a charming arcade feel. I can't much criticize the game for anything, as its goal is to replicate an actual pinball machine, and it does it well. If you don't like an older, slower pinball machine that mainly has a target bank, a few bumpers and rollover lanes, you probably won't like this computer equivalent either. But if you want to relive a bit of nostalgia on your PC, Eight Ball Deluxe succeeds in spades. Highly recommended, especially for fans of the real table. 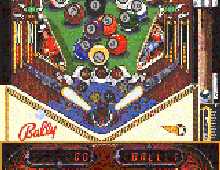