Electronic Pinball is the last pinball game from 21st Century Entertainment before quietly going out of business in 1998. As the company was going through financial troubles while developing the game, it is not surprising that Electronic Pinball would pale compared to earlier classics like Pinball Fantasies.

Which is not to say Electronic Pinball is a bad game: it is just far from the usual 21st Century standards. The game includes four fun hi-res SVGA tables, multiplayer modes, and a realistic pinball physics model. In contrast to most pinball games, tables in Electronic Pinball do not scroll: you see the entire table on the screen at a 800x600 resolution. This makes the screen look very sparse, since the table doesn't even fill half the screen, and score tables that occupy the rest of the space don't really fill much of it. You cannot change the resolution or choose the traditional scrolling-table option, so you will simply have to get used to this new, but inferior, approach to presenting pinball.

The gameplay itself is up to par with 21st Century's previous games, which means good table designs, lots of combos, smooth animations, interesting themes, and solid ball physics. The four tables - Speed Freak, Globetrotter , PC Pro, and Safe Cracker (my favourite) - are well designed, but present nothing particularly revolutionary. Thanks to SVGA, the tables are nicely animated and detailed, with a lot of colors and sound effects.

Overall, Electronic Pinball is one of the better pinball games on the market, but will probably disappoint fans of 21st Century who are looking for the next incarnation of Pinball Fantasies. 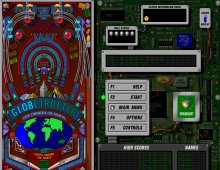