GateWorld is a decent platformer that bears more than a passing resemblance to Apogee's better-known Commander Keen games. You play Captain Buzz Klondike, intrepid space adventurer. Your task is to make your way through ruined cities and jungles and hordes of aliens, on your way to the capital city of GateWorld where more perils await. You will meet the dreaded G.O.R.G. machine in Part 1, "The Seed Ship," which is the only episode available in the shareware version. The registered version (which is for download below) feature two more episodes with many more enemies.

Gameplay is identical to a typical platformer: shoot everything in sight, find keys and toggle switches to progress, and collect power-ups to defend yourself against the aliens. It's a familiar fare, but at least GateWorld boasts a strong level design, with many different locations and monsters, that elevates it above "average" status. I also feel it to be a bit more difficult than Commander Keen games, so it's a good choice for anyone who thinks Keen games are too easy and short. Definitely well worth a look, although not a true classic. 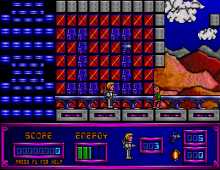 People who downloaded this game have also downloaded:
Jazz Jackrabbit, Game With A Kitty, A, Cyril Cyberpunk (a.k.a. Cyberboard Kid), Chickie Egg, Garfield: Caught in The Act