Garfield: Caught in The Act

Garfield: Caught in the Act is a fun platform game starring everyone?s favorite hungry cat. As the game begins, Garfield has somehow been sucked into, and is now trapped inside, a TV. Your task is to help him find missing remote-control pieces to assemble a remote control, and use it get out of that infernal box.

The game plays in a typical avoid-obstacles-and-find-the-exit goal common to most platformers, with colorful background graphics and smooth animation of Garfield and his antics. Levels are a bit repetitive (zany graphics of circuitry inside your TV isn?t that interesting, after all), but there are many interactive objects to keep gameplay fresh. Garfield, for example, can grab a hold of overhead wires and swing himself across chasms. Similar to Activision?s Pitfall , Caught in The Fact requires more dexterity and timing in getting from point A to B, than on rapid-fire attacks against hordes of monsters. Similar to SEGA?s other platformer Comix Zone, there are many well-animated cutscenes shown at the end of each level to advance the plot. Overall, Caught in The Act is solid fun for all fans of the comics, although it could use more clever level design and gameplay variety. Recommended. 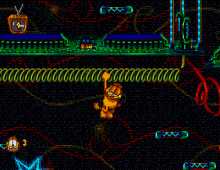 Garfield: Caught in The Act screenshot