Taito's Dark Century is a retro perspective on team deathmatch, offering you the chance to pit your team of tanks against another human or an AI opponent. Bots on your team are minutely configurable. Speed, attack patterns, and even contingency plans can be created. Unfortunately, the icon driven interface is complex, and, for the most part, mystifying. Hours spent deep in subtle alterations translate into bizarre and strategically unsound behaviour on the battlefield. Honourable mention must be given to the tank graphics, which are an impressive use of EGA. Not so the play area, which is square, grey and flat. Along with the lack of missions, or any gameplay structure, the game's long term appeal is therefore limited. An interesting idea that doesn't quite work. 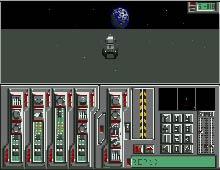