One of the worst fighting games ever made-- and possibly the only game from obscure Italian company Micromania. First impression of the game isn't bad-- it's a 2D fighting game starring superhero-type fighters in latex. It's only when the game proper begins that you realize how truly bad it is.

To say this game is a "disappointment" would be an understatement, at the very least. Character graphics are decent-- but only when they are not moving. This is supposed to be a beat-em-up game like Street Fighter 2. Take out the personality, gameplay and fun of such games, and you have Dangerous Streets. The control is horrible, and the animation is very poor in showing what is actually happening-- you cannot even tell if you're hitting your opponent or not). You?ll spend an eternity wrestling with god-awful controls to get your fighter to move, and THEN struggle to tell if you've hit anything or not.

In conclusion, Dangerous Streets is undoubtedly one of the very worst fighting games ever. It?s arguably even worse than Rise of the Robot, judging from the fact that it?s much more obscure (faded from store shelves much quicker). If you like fighting games, do yourself a favor and avoid this game at all costs... unless you?re a masochistic gamer :) 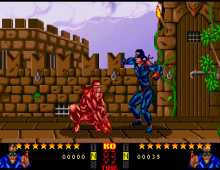 People who downloaded this game have also downloaded:
G-Nome, Mechwarrior, X-Men: The Ravages of Apocalypse, Magic Carpet Plus, EVO: Search for Eden