One of the most original games ever made, Bullfrog's Magic Carpet is a classic action/strategy hybrid that remains eminently playable years after its release. Magic Carpet Plus is a re-release of the game that contains both the original Magic Carpet and Hidden Worlds add-on that adds dozens of new levels and spells.

The game's originality shines right from when you first learn of the plot. An evil wizard harnessed all his powers to shatter the (very Arabian Nights-inspired) world, thus distributing the land's supply of mana to the beasts, turning them into powerful, menacing creatures. The burden falls on you, an apprentice wizard, to establish equilibrium to these shattered worlds by collecting mana, whether it belongs to deadly monsters, competing wizards, or to nobody at all. The mana is represented in the game as color bubbles scattered throughout the land, and you must continually collect them to cast powerful spells. You win each level (i.e. island) by destroying the castles of enemy wizards.

What makes Magic Carpet a blast to play is the great gameplay dynamics, combined with jaw-dropping 3D graphics that was well ahead of its time. You will build up a repertoire of powerful spells, up to around 30, and each level typically contains at least one new spell you can discover. Enemy wizards learn from your strategies, and will even battle amongst themselves when you are too weak, too strong, or too far away. As Brent Sampson observes in his comprehensive Games Domain review: "gameplay [in Magic Carpet] is a balance of offense and defense, where actual strategy is required to be successful. All too often, for example, your success depends upon choices made in the heat of battle. Should you protect your castle (which stores your mana) from an attacking wizard, or should you venture out to gather more mana so your castle (and you) will be stronger? Or is the best defense a good offense; should you attack the wizard's castle to draw him away from attacking yours? What is successful at one point in the game might not necessarily be successful the second time. And this is the aspect of Magic Carpet that makes it so thrilling."

Aside from extremely addictive gameplay that perfectly combines action and strategy, Magic Carpet also deserves mention as the very first PC game to effectively represent dramatic terrain changes in real time-- and this is but one of the game's strong points. For example, you can cast a volcano spell and watch as a volcano magically rises out of the terrain in front of you, in real-time, and stays there for the duration of the game. Or cast an earthquake spell to split an entire island in two, and then fly through your newly created canyon. The possibilities, it seems, are almost endless.

The only complaint I can think of about this classic is the fact that you can quickly bump into the many hidden "monster triggers" that call forth dozens of nasty beasts. When that happens, it's almost impossible to win the island, as you'll be busy fighting both the monsters AND enemy wizards. Some of the game's extra features don't work very well-- the 3D mode (meant for use with 3D glasses included in the game box), and stereogram mode are nearly unplayable. Regardless, sheer ingenuity and addictiveness of the game more than outweigh these points. With 50 islands and at least that many more in the Hidden Worlds add-on, Magic Carpet Plus will keep you up nights for months to come. Highly recommended! 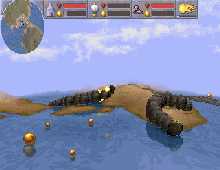 People who downloaded this game have also downloaded:
Syndicate Wars, Oddworld: Abe's Exoddus, System Shock, Alone in the Dark, House of the Dead 2, The