Czorian Siege is a straightforward Space Invaders clone: shoot the enemy ships from the ground. The game is fairly easy since you only need to worry about a handful of ships at a time. Nothing special, except that it has digitized speech - no mean feat for a game made in 1982. If you like easy Space Invader games, check out this oldie old game that was slightly more well-known on the Tandy TRS-80 computer. 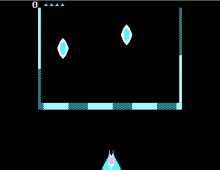