Too easy and too dumb. The story is "very original" - president's daughter was kidnapped and You, "super crime fighter" Luke McCrabe, are on a rescue mission. Super crime fighter? What the...? He looks more like a comedian to me. Oh, there is one good thing in the game that added just about 30% to it - president's daughter! She's really cute. Note: When You start the game it will ask You to enter a code (copy protection). Just press ENTER and it will let You in (do not type anything).

Arcade-style action game by Access Software - very "inspired" (to put it mildly) by the coin-op game Narc. Nothing special, except that most of the blood-filled graphics are digitized - as done very often in Access Software's games of that time. The plot is just there to window-dress the action part: the president's daughter is kidnapped, and it's up to you, "super crime fighter" Luke McCrabe to rescue her and save the day. Gameplay is simple 2D side-scrolling action, in which all you do is blast endless waves of baddies. Digitization is a technique that may be useful and attractive for adventure games, but for this kind of action game it just didn't work out-- everything looks very pixellated, cardboard-cutout, and people's movements are very jerky (imagine moving paper dolls around). The game is far too easy, too repetitive, and boring to watch. Even the action sequence in Dynamix' Rise of The Dragon is a lot more fun than this entire game.

Without a doubt, Crime Wave has the appeal of a cheap shareware game, and a low point in Access' long career. No wonder the company didn't return to the action genre at all after this Real Dog. 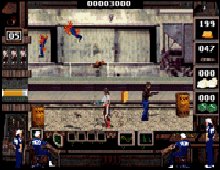 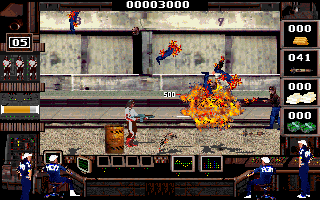 People who downloaded this game have also downloaded:
Prince of Persia 2: The Shadow and the Flame, Crime Killer, Fifth Element, The, Metal Gear Solid, Magic Carpet Plus