The Fifth Element is a decent first-person shooter from Kalisto, published by UBI Soft in 1998. Games Domain's review says it all about this marginally above-average game:

"I'm happy to say that , a new game from Kalisto, based upon the film of the same name, is not a hastily churned out effort, released just to cash in on the popularity of the movie. [The game] received a bit of a bashing by some critics, although personally I thought it was pretty good, as long as you didn't expect anything particularly deep. The movie centred around the escapades of Korbin Dallas, an ex-marine taxi driver, and Leeloo, the supreme being, a girl who ran about wearing bandages strategically placed over certain areas of her body. Leeloo, being the supreme being and that, was the only person who could save the Earth from a malevolant force that threatens mankind every 5000 years. And unsurprisingly, the game follows pretty much the same plot. You play Korbin and Leeloo - Korbin on some levels, Leeloo on others - and you have to make your way through a series of locations from the film, collecting the four elements you need to stop the ultimate evil approaching Earth as you go, until you reach the final showdown and are able to activate the elements and repel the evil. So how do you go about this? Er, by jumping around and blowing things up - which is pretty much what happened in the film, so at least it's true to the movie in that respect.

If you get bored with having to spray an entire room with gunfire before you can hit anything, then you can have a crack at playing as Leeloo - although to complete the game you need to finish all the Korben and Leeloo levels, so you can't finish the game by just playing as either Leeloo or Korben. Leeloo prefers hand-to-hand combat to gunplay and is able to dispose of the baddies scattered around The Fifth Element's levels by somersaulting around them and kicking their heads in with an assortment of punches and kicks. In theory, that is - in actual fact, you can run up to an enemy and just pump the various punch and kick buttons and see them off fairly easily. Leeloo's levels are more like Tomb Raider in terms of jumping-about-platforms-iness although it contains nowhere near the amount of platform hopping involved, and for the supreme being, she's somewhat less athletic than Lara, apparently able to hold onto the ceiling but unable to pull herself up over the side of ledges.

So then, blasting, kung-fu kicking, and the odd bit of jumping and ducking is the order of the day where The Fifth Element's concerned. Then, there must be a wide variety of well designed levels for you to make your way through. Well, not particularly. There are thirty or so levels, but only fifteen areas for you to explore - this is because once you've cleared an area as Korben, you then go through it again as Leeloo, dispatching the same enemies who are now bizarrely unarmed - a concession to Leeloo's lack of weapon skill but one which doesn't do much for the continuity of the game. And while the locations featured in the game are supposedly based on the ones in the film, they all seem rather flat and predictable.

Kalisto could have used the licence to produce a real stunner of a game - even one that arrived a year after the movie. Instead what they've produced is a rather standard Tomb Raider inspired shoot-em-up that doesn't really offer anything special. It's not particularly involving, and you're likely to find your interest waning pretty quickly. I hope this game doesn't signal a return to the bad old days of sub-standard movie licenses, because it's certainly not something you should bother with." 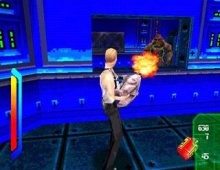 People who downloaded this game have also downloaded:
House of the Dead 2, The, Alien Trilogy, Simpsons, The, X-Men: Children of The Atom, X-Men: The Ravages of Apocalypse