Creature Shock is one of the worst games ever made and a poignant example of how shallow gameplay can kill the game despite whiz-bang graphics. Let's first get the (very thin) plot out of the way: in 2123, faced with a delicate problem of overpopulation, mankind is forced to seek other planets to colonize. Three space ships are therefore constructed, each having a specific destination in the solar system. The first, Myrmidon, will be sent towards Mars while the second, Aztec, will explore Venus. Finally, the third, Amazon, will be in charge of exploring the planets Jupiter and Saturn and also their moons, which (presumably) could support life forms. Near the end of its four-year voyage, the Amazon disappears and leaves only a distress signal transmitted by the ship's probe. In order to understand what exactly happened, you must, with the help of the Lynx FTL Scoutship, go to the last known position of the Amazon and discover what has happened to the ship and its crew.

Rule number one in computer gaming industry: good graphics do NOT a game make. Creature Shock violates this rule right from the start. It has nice graphics. Astounding, in fact, given that it was made in 1994, long before the advent of 3D accelerators. The graphics are so wonderfully textured and smoothly animated that they put most other games to shame. But...that's it. If you don't have a mouse, your out of luck here. Gameplay can be summarized as: point, click, click, click, click, click, point, click, point, click. Woo woo! Excitement! I think a monkey who pointed and clicked at the right things would be rewarded with a nice cutscene every now and then, and can actually finish this game. Stage one has you piloting a ship that you can't speed up or slow down, that you can't see what your targeting, that you don't know how close you are to your goal. Then, when you blow up some huge thing, a ship I imagine, you get to stage two where you exit the ship, get some nice graphics and then commence pointing and clicking at monsters to kill them. Your targeting cursor is *automatically* pegged to the alien, so the only way you'll miss your shot is if you can't click fast enough (either that, or you can't find your mouse). I was amazed at the lack of control, the lack of plot and not to mention the lack of thought on the part of the player required to play. Track-based shooters with lots of prerendered cut-shots are indeed the bane of our existence. I don't even know why I'd upload this game here, other than perhaps the fact that there aren't yet many Real Dogs on the site, and I was itching to blast some games to oblivion. I warn you now: avoid this Real Dog like your life depends on it. 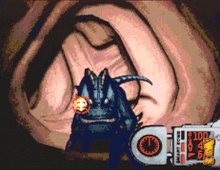 People who downloaded this game have also downloaded:
House of the Dead 2, The, Fifth Element, The, Kingpin: Life of Crime, EVO: Search for Eden, CloudPhobia