CloudPhobia is yet another excellent freeware horizontal shooter from Japan. Featuring excellent "mecha" designs that are reminiscent of Gundam series, the game looks great and plays even better. In this "time attack" game, there is only one level: you basically must withstand the nonstop onslaught of incoming ships until you get to meet, and defeat, the big "boss" ship. You pilot a mecha - giant robot - equipped with thrusters, laser blaster, and missiles. The novelty of the game is that in addition to dodging enemy fire, you must also protect the mothership that hovers invisibly offscreen to the left. If you let too many enemies and their fire pass by, the mothership will be damaged - as signified by its own health bar at the top of the screen, right below yours. Naturally, the game is over when the mothership is destroyed, no matter how healthy you are.

You can collect a number of power-ups to inflict more damage, and score combos to earn more points. All the ships and robots in the game are very well animated, and the special effects are much better than cardboard-cutout explosions you see in countless freeware shooters. Replay and practice options round off a very polished game from the booming freeware 'scene.' If you enjoy shooters, CloudPhobia is a great addition to your collection, although it may become repetitive after you beat it once, due to the lack of new levels and enemies. Recommended! 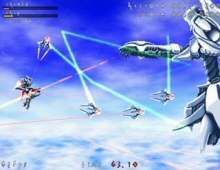