Crack Down is a conversion of Sega's Mega Drive game and compared to many other conversions Crack Down is one of the better games although nothing unique is offered in the game. The game is a regular action game where you view the game from the top and you have to shoot enemies and complete different levels.

During each level you have to place different bombs at certain spots and at the same survive but killing the different guards and other enemies that are trying to stop you. Some of them are tougher than others but mostly they aren't too hard to kill unless you fight more of them at once. Just remember that you don't have unlimited ammo so sometimes it is wiser to run that stay around and use ammo on guard while trying to hold them away.

The gameplay is at a good level and while the game is challenging it isn't too hard to play so all players get a chance to learn it before it gets tougher. The graphics are actually pretty good when you consider that the game is from 1990. The sound is annoying though and it is recommended that you disable it if you can. A decent top shooter game with good gameplay, good graphics and is overall easy to get started with.

Crack Down is a decent conversion of SEGA's Mega Drive/Genesis top-down shooter. As with all good arcade games of yore, Crack Down is simple to learn but challenging enough to keep you playing. There aren't any complicated moves to learn, nor are there different objectives to accomplish. All you need to do is make your way through each level before time runs out. Missions involve moving your way through mazes from an overhead perspective. In order to complete the level, you must walk on areas designated by a large red "X," where you'll automatically drop a time bomb. After dropping all of your bombs, you simply walk out the exit and the level is completed. A map at the top of the screen shows the entire level so you know exactly where to go.

Of course, you won't be able to just waltz right through each stage. There are multiple guards and creatures that will stand in your way, as well as obstacles that can be used for cover. Some enemies will shoot bullets, some will just punch, others will use fireballs. The enemies also differ in strength and quickness, with several requiring multiple shots to bring down.

Your character has a standard machine gun and cannon (which packs a more powerful blast) to use against the enemies. There are also a few Super Bombs at your disposal that will wipe out everything in your view. It's important to note that you have a limited supply of ammo, so you should know when to shoot and when to just run away. Fortunately, your character can hug the walls to avoid enemy gunfire and packs a mean punch if you run out of bullets. The only drawbacks to the game are the repetitive action (which is inherent in nearly all early arcade games) and some slowdown that occurs when a lot of enemies appear on the screen. There are also some annoying disappearing floors and conveyor belts that need to be crossed, which are rather difficult since they are so narrow. There's little room for error.

Overall, Crack Down is a fun, strangely addictive game that combines some strategy along with the action. Each level becomes more difficult than the last, with an increasing variety of enemies and dangers such as bottomless pits or acid pools. The fact that you must often avoid the enemy is a refreshing change of pace from the mindless shooting in similar action titles. One of the better things about this game is the two-player mode, which makes the game a bit easier to finish. Highly recommended, but think twice if you're not expert at this kind of games :) 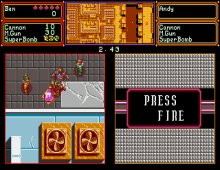