Undoubtedly the most successful game from Windmill Software, Digger is a timeless action classic that combines the best elements of Atari's Dig Dug and Mr. Do. MobyGames says it all about this masterpiece that remains one of the most fondly remembered games for old-timers: "Dig through underground tunnels as you pick up gems. Drop bags of gold on the bad guys, then pick up the gold afterwards--or, kill the monsters using your one-shot gun (refuels after 30 seconds).... Digger is a classic in all respect. Its graphics are good, music great, controls excellent and playability level unmatched at the time. It was technically remarkable, way ahead of its time, with polyphonic music and sound effects, simplistic but effective computer AI and an amazing charm which keeps people playing it to this day. It's obvious that Digger's ideas were stolen from existing games, but Windmill managed to improve them greatly."

If you ever wonder how a game can fit under 50KB and still provides a lot more fun than many of today's bloated, multiple-CD, 3D extravaganza, Digger is the best example. A true classic in every respect, and a must-have for every serious action fan. Also be sure to check out the outstanding remastered version by Andrew M. Jenner, which adds optional VGA graphics, record and playback options, and even a two-player simultaneous mode.

This is another one of the first games I ever played. I remember when our school had this game on the old XT machines, and it was basically the only game they had =

You are a little digger, and you dig tunnels collecting gems. Then get as much gold as you can ;) You can be strategic and kill the evil guys with gold bags, by dropping them on their heads. I do believe you can shoot stuff as well, but its much cooler to kill them with the gold, because you can only fire so often anyway.

I can't really say that much about the game, except that it created a worldwide Digger phenomenon. People loved it; it is a classic indeed! Those dim orange, gold, red and green colours, the beeping and classy sounds! 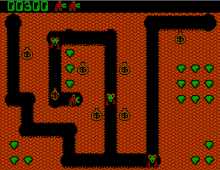 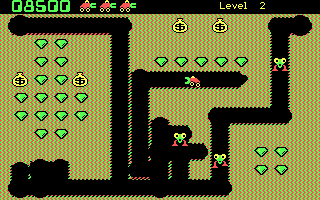