Cool Spot is a fun, colorful platform game featuring the 7-up mascot as the hero. The game's objective is fairly simple: you have to collect enough number of bonuses throughout each level in order to find the trapped Spots.

As Accatone pointed out in his review of the game for MobyGames: To be able to direct a "cool-looking" star through our microcosmos sounds something unlike any other journey in our computers? Well, in my humble opinion, Cool Spot has tried to be an alternative with that known feel of platform gaming, but rather having more addictive effect; an addiction to see further...

I know its well-drawn graphics and funky soundtrack has that potential. And I bet you can't resist Cool Spot either who yawns, cleans its sunglasses or plays with a yo-yo when you do nothing 8

But Cool Spot has something missing. Yeah, it has difficult gameplay even at its easiest level and a level design which adds no any special feature into its ideas. Maybe you could also blame our 7-Up mascot for its rather slow movement. However, what actually the game is lacking is it doesn't feature a new look-and-feel for a platform game and you don't feel yourself having played something special either.

Anyway, without a doubt, Cool Spot is one of the few good platform games available for PC. And if you ever get the chance to play it, don't miss it! It seems that it even hadn't lost any of its features while being converted from the original Mega Drive version! So, highly recommended... "

Cool Spot is a nice game, wich is also released for the GameBoy. You can walk, jump and shoot. You must a special number of coins/gems before you can go to the end and you must finish in time. On your way you might get trouble with other animals. This game has nice graphics and is good playable.

You might remember him off television, the 7-Up mascot. He is the little red dot dude with cool shades, funky attitude and Mickey Mouse gloves to match.

I think the only part of this game that I actually found easy was the yo-yo playing part. Then again, that did happen after you left it idling and he got bored (like Commander Keen and his book ;) hehe). The difficulty I had can be blamed on the fact that I'm lame when it comes to some games that require me to move around fast and jump things. Jumping is not my forte.

So anyway, the game is fun. It's a side-scrolling platform, consisting of many levels, rather interesting enemies, and a whole lot of jumping. You collect clocks for time extensions, as you're racing against time to get through the levels. You can also collect other stuff for points, and red dots that float and look magical for bonus things. In the top right hand corner is his cool meter, and you have to collect 7-Up to keep him from turning into a totally Uncoolspot.

I can't really say too much, as I didn't get very far. I did enjoy the levels I played, and apparently it's a great game. So download it and have a play. 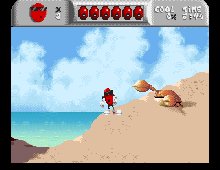