Mall Monster is a great game from a team of programmers at Digipen Institute of Technology. You play a little kid who has been locked inside a mall, and now it's the middle of the night and you have to get out before the mall monsters get you.

The gameplay is reminiscent of Atari's old Haunted House: you spend most of the time exploring the mall, trying not to get caught by a monster. "Fog of war" prevents you from seeing anything beyond your field of vision, but while you cannot see, you can hear everything. On-screen arrows point out which direction sounds are coming from, including doors opening and monster's footsteps. On the other hand, the monster also can hear your footsteps and any other sound you make. As the monster comes closer, you will hear your heart beat faster and faster. This makes the game very suspenseful and atmospheric, not to mention creepy when played at night in silence. Highly recommended to fans of horror or action games who are looking for something outside the usual "kill everything in sight" theme. 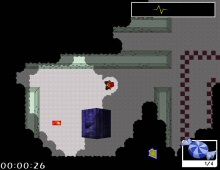 People who downloaded this game have also downloaded:
Jailbreak, Haunted House, Revenge of The Toys, Legend of Billy The Kid, The, Jaywalker